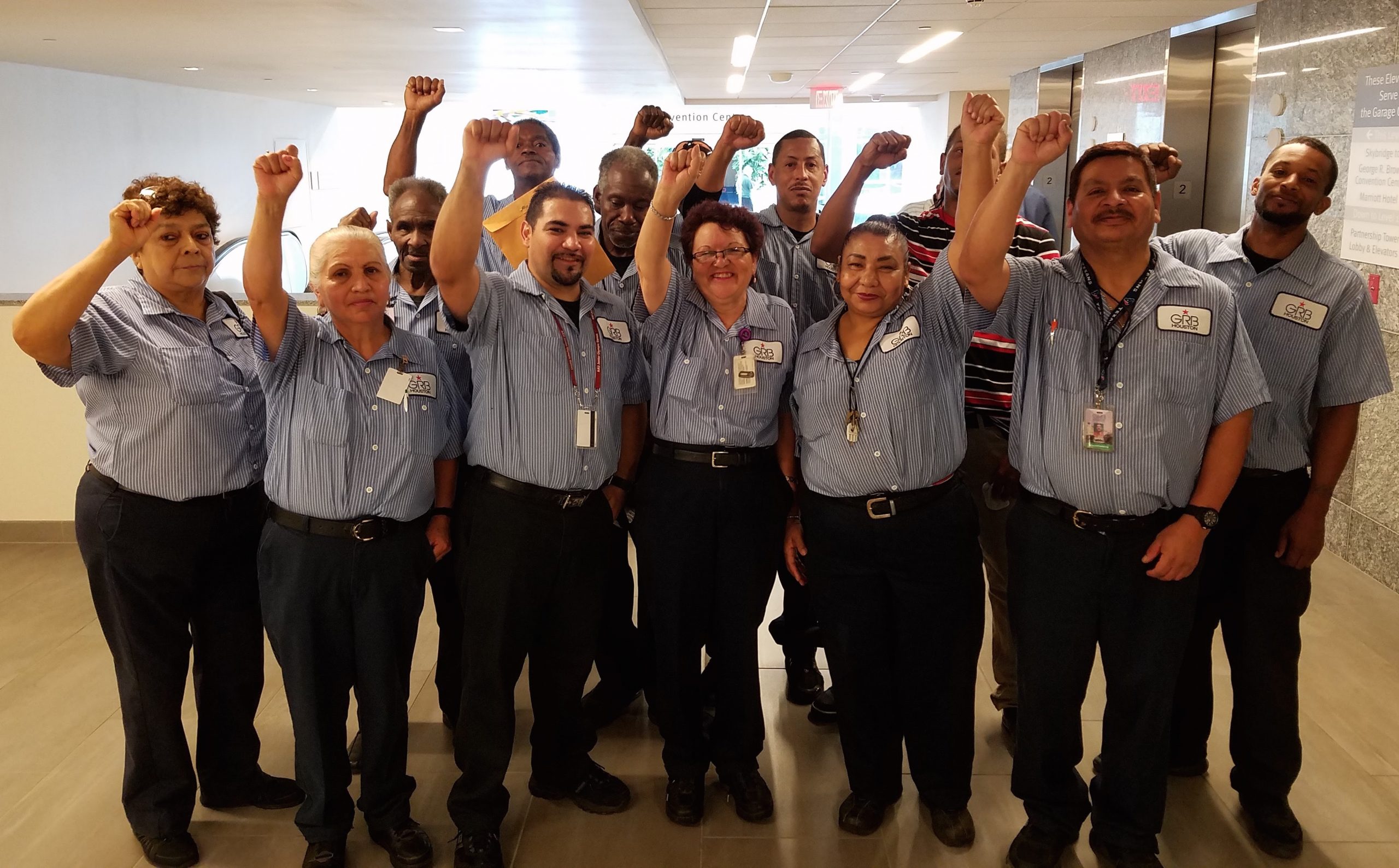 In a historic victory for workers who clean facilities operated by Houston First Corporation, a new contract was ratified by SEIU Texas members yesterday that will raise the minimum wage to $12 per hour, from the current rate of $9.35, for roughly 100 employees by January 2021.

During the bargaining process which finished in late fall, both parties agreed to a tentative agreement that included a new wage scale which calls for a series of pay increases over the next three years to get wages to a minimum of $12 per hour for housekeepers, floor technicians, and other staff employed by Midwest and its subcontractors. On March 15th, Houston First approved an amendment to its Event Cleaning and Janitorial Services Agreement with Midwest to allocate additional funding toward salaries, clearing the way for workers to vote on the ratification of its tentative agreement with the company.

Cleaning workers at Houston First made the news last year by displaying their commitment to Houston families when more than 10,000 Hurricane Harvey victims sought refuge at the George R. Brown Convention Center. Many workers stayed at the Convention Center around the clock alongside displaced Houstonians, waking only to begin cleaning and supporting volunteer activities throughout the facility.

Anita Hernandez was at the Convention Center when flood waters engulfed the surrounding area. It was supposed to be a typical day at work, but her duties suddenly entailed caring for hurricane victims. “I worked seven days in a row,” she stated during the public session at City Hall in October. “And when I wasn’t cleaning the restrooms or taking out the trash, in my off-time I changed diapers for elderly flood victims, took them to the bathroom, cleaned them, got their food and fed them. I even sent photos and videos to their loved ones in Mexico and across the U.S. to let them know they were safe. I’m still in touch with many of them today.”

Maria Garcia, another Midwest employee, also spent her week at the Convention Center while her neighborhood flooded. “I was on 12 hour shifts,” she told Houston First executives during a board meeting in February. “Not only did I do my job, but I was also a victim of the hurricane. My home flooded. I lost a lot during the flood, and am still trying to get my life back on track. But I am proud of my job. And I am committed to the people of Houston.”

Mayor Sylvester Turner also expressed his support for higher wages for cleaning workers at Houston First. While meeting with Midwest workers earlier this month, he stated: “At some point, we need to get up to $15. But this is a step forward…And what I said to Houston First and to you at the airport, that we all need to get to that $12 for now. And then we’ll see where we go from here,” stated Mayor Turner. “Y’all deserve it and work hard for it….We thank you all for what you continue to do. And we are all in it together.”

“And let me thank SEIU,” he continued. “You have stayed on the forefront, on the battle lines, fighting for the employees, for their respect, dignity, and the right to get paid what you earn. I am always on the side of treating people with respect and with dignity.”

The new contract will also provide up to two days of disaster pay for employees if they are out of work due to a natural disaster, and individual out-of-pocket healthcare premiums will be reduced from $111 to $67.

The members of SEIU Texas are grateful for the support we have received from progressive leadership on the Houston First board and the City Council in our efforts to help lift Houston workers out of poverty. We also look forward to continuing our positive relationship with Midwest Maintenance, which was an important factor in securing a contract that will improve the lives of workers at Houston First.