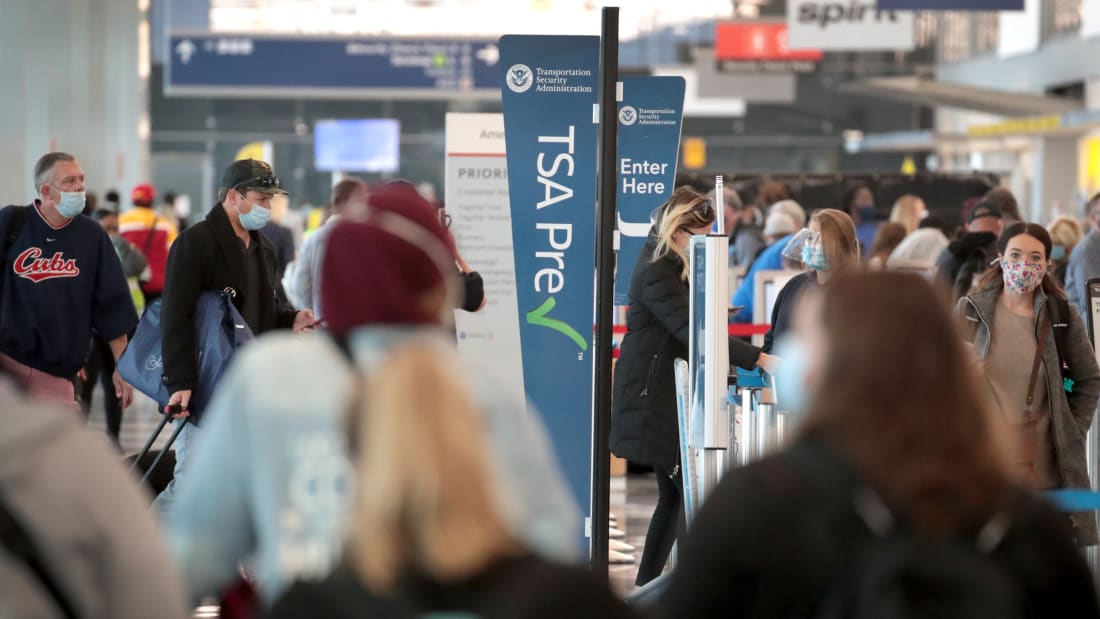 Francesca Street (CNN) December 18, 2020 — Airport workers in the United States are on the frontline of the Covid pandemic yet many feel they are being unnecessarily exposed to risk through inadequate safety equipment or failure to offer sick pay, according to a new survey.

Of almost 900 workers from 42 airports across America, 80% said they felt their work puts them at increased risk of Covid-19 with one in five saying they hadn’t been given PPE by their employer, airport or airline, the Service Employees International Union survey reported.

Concerns were also raised about inadequate training, pressure and lack of time off and healthcare — more than half those surveyed said they don’t have the right to paid sick leave.

Airports and airlines have told CNN that their workers are properly protected, however, the union said its survey revealed that many staff, who are often contracted by external companies, felt let down.

SEIU Executive Vice-President Rocío Saenz says that the union conducted the survey in September 2020 after hearing stories about health and safety concerns from airport workers across the country.

“We wanted to get a sense of how widespread these concerns about health and safety were,” she told CNN. “We also knew that Black and brown communities were especially impacted by Covid-19 and airport workers come from these communities. These workers are a critical piece of the industry and shouldn’t be left out of the response to Covid.”

Of the almost 900 workers surveyed in the report, 37% were Latinx/Hispanic and 32% were Black/African American. Immigrants accounted for 54% of those surveyed.

Terminal and cabin cleaners, baggage handlers, security officers and wheelchair attendants were among respondents to the union’s questions.

Joshua Freeman, who works as a cabin cleaner for a company that’s contracted by United Airlines at George Bush International Airport in Houston, Texas and took part in the survey, tells CNN he wasn’t surprised by the results of the report.

The report highlights concerns about inadequate workplace protection from Covid. Only half of the airport workers surveyed said their employer provided them with masks.

“We were originally provided masks and gloves but I never got any,” says Freeman, who adds that PPE isn’t “readily accessible” and “ripped easily.

“There’s no testing available, Freeman says, but he does get his temperature tested each day.

Sadia Bultum, who is employed as a janitor and cabin cleaner at Seattle-Tacoma International Airport, says she feels at risk due to the number of people she interacts with daily.

“We’re always more than 20 people in the break room. More than eight people in the truck, on the flight together, working together,” Bultum tells CNN. “And you can’t know who might be sick if they don’t have symptoms.”

Bultum works for two different companies. She says the company who employed her as a janitor gave her seven washable masks which she alternates between. Meanwhile, the company which employs her to clean Delta aircraft cabins only gave her two disposable masks back in the Spring.”It’s almost a year now that’s all they’ve given us,” she says.

“We’ve handed out nearly 400,000 cloth face covering to port staff as well as any tenants and airport stakeholders that need them,” said Seattle-Tacoma Airport’s Media Manager Perry Cooper, in a statement provided to CNN. “Our allotment from FEMA still has more than 2 million left to last us through the rest of the situation.”

Cooper added that each individual airport employer is responsible for providing PPE to their employees.

“The airport is a supplement or a way to fill in any gaps for those employers for cloth face coverings,” he said. “Those employers have their protocols and procedures as well. We’ve worked in many ways to get the word out as often as we can to let them know we can help.”

Yolanda Rodríguez is employed by an external company as a terminal cleaner at Chicago’s O’Hare International Airport. She is quoted directly in the report, addressing concerns about Covid exposure.

Rodríguez says her company doesn’t tell its employees if they’ve been exposed to the virus, and her mask feels insufficient protection. She would be more comfortable with a disposable cover she could put over her clothes.

“We don’t know if our clothes carry the virus and we take it home,” she says.

Rodríguez adds that, as is commonplace in contractor roles, she and her coworkers are not entitled to sick leave.

“We need paid sick days because nobody has chosen to become sick on the job,” she says.”

In the SEIU report, 69% of those surveyed also said they hadn’t received training on how to protect themselves and passengers from the virus. 66% said they hadn’t been told how to safely put on and remove gloves, masks and other PPE.

Teresa McClatchie, who works as a contractor for United Airlines at George Bush International Airport in Houston, spoke to CNN Travel earlier in December for an article examining working conditions at airports across the world.

McClatchie, who is also quoted in new SEIU report, said United Airlines management doesn’t inform her or fellow workers when a colleague has contracted Covid.

The United States does not have a track and trace app to alert people when they’ve been in contact with someone who has since tested positive.

The airline did not respond directly to McClatchie’s statement about Covid exposure, but the airline said: “The health and well being of our 100,000 employees across the globe is our highest priority. This crisis continues to have a very profound and personal impact on all of our hard-working teammates.”

Houston Airport officials said that the airport had “implemented dozens of enhanced safety measures throughout our terminals which includes increased hand sanitizer stations and deep cleanings of high touch-point areas.”

It also said: “Everyone is required to wear a mask inside George Bush Intercontinental Airport. This is a city requirement. If anyone does not have a mask, our team is giving away masks, free of charge, at terminal entrances. We encourage everyone to come and get a free mask.”

The SEIU report states that in August 2020 the proportion of outsourced workers at airports was 32.52%. The union is advocating that outworkers not be cast aside if airlines are bailed out.”

It would be awful if these workers, who have risked everything to keep airports running since March, were to be laid off. They must be included in any legislation meant to save aviation jobs,” said SEIU’s Rocío Saenz.

We need rules,” she says. “Like, avoid close contact employee-to- employee. Respect the rule of 6ft distance. Let the employees know if we’re exposed so we can quarantine. Keep the breakroom clean and our areas clean and disinfected.”

Perry Cooper from Seattle-Tacoma Airport tells CNN that “over 8,000 signs” have been installed throughout the airport to inform passengers and employees about social distancing and other recommendations, alongside nearly 300 hand sanitizer stations.

For Freeman, it’s about employers and airports doing what they can to make a tough job, in an unprecedented situation, as safe and bearable as possible.

“The job has to be done and I am ready to do it but we should be appreciated, respected and properly compensated for the risk,” says Joshua Freeman.

This article was originally published on CNN Travel